“We loved with a love that was more than love.”
– Edgar Allan Poe

With the Dominican Republic as the picturesque backdrop, Victoria and Travis became Mr. and Mrs. Travis Porter on May 15, 2019 before an intimate setting at the Excellence Punta Cana Resort.

Victoria’s father asked Travis to wait to propose until he was home from work so that he and her mother could be there to watch. Then, Victoria’s family planned a trip to Walt Disney World in March of 2018. Between her parents, Travis, and his sister Ashley, they planned the proposal. Travis proposed on the pier at the Grand Floridian in Walt Disney World in front of the fireworks. It was truly a family event and the start of their families coming together.

The Resort and Wedding Planner

The resort where Travis and Victoria were married had an event planner, Yessica, and she was amazing. She made the process easy and worry free. They did all of their communicating through email until they arrived at Excellence Punta Cana. They had to be at the resort two days prior to the ceremony to finalize all the details. When they met with Yessica, they brought their wedding clothes so she could have Travis’s suit ironed and Victoria’s wedding dress steamed. She also helped them pick out which restaurant that they wished to hold their reception..

Victoria participated in pageants in her teens and early twenties, and knew when she tried on a pageant dress that it was “The One”. She had a very clear vision of what she wanted. Victoria tried on wedding dresses at a few different bridal boutiques, but didn’t love anything. She knew that she wanted a dress that was tight fitting with a removable overskirt. She doesn’t advise anyone take the next course of action that she did; however she saw a dress that she loved on Instagram. She ordered a Milla Nova dress without trying it on or seeing it in person. The skirt is from Galia Lahav, and it was removable! Although, it was two different designers, you couldn’t tell because the fabrics colors matched.

Music
The newly married couple exited the ceremony to the song “I was made for loving you” by Kiss.

Honeymoon
Victoria and Travis spent their honeymoon at the resort. They had three days before the wedding and three days after the wedding. And it was absolutely amazing! They did a couple’s massage on the beach, a spa day, snorkeling, shopping, went to the nightly shows, and relaxed by the pool.

How the Sun is Making You Look Older, Sooner

5 Signs You Need to Revamp Your Wardrobe 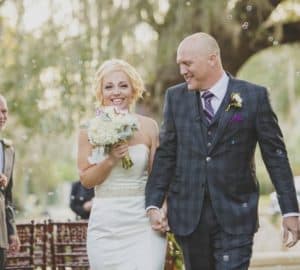