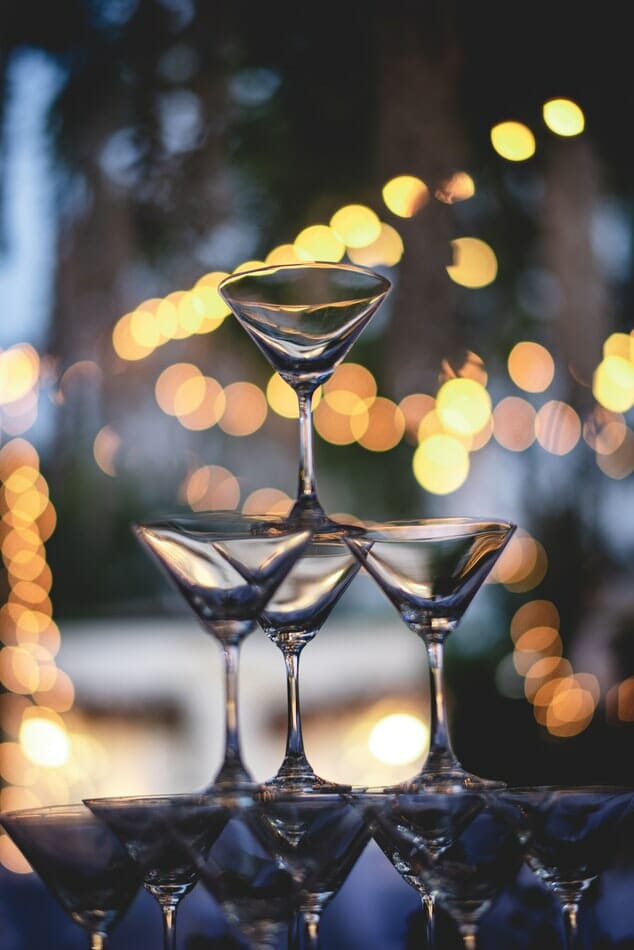 At its core, the martini is a cocktail made with gin and/or vodka and vermouth, and garnished with olives or a lemon twist. Over the years, the martini has become one of the best-known mixed alcoholic beverages.  The journalist and essayist H. L. Mencken called the martini “the only American invention as perfect as the sonnet”.

The exact origin of the martini is unclear. The name may derive from the Martini brand of vermouth. An other popular theory suggests it evolved from a cocktail called the Martinez served sometime in the early 1860s at the Occidental Hotel in San Francisco, which people frequented before taking an evening ferry to the nearby town of Martinez, California. Alternatively, residents of Martinez say a bartender in their town created the drink, while another source indicates that the drink was named after the town. Indeed, a “Martinez Cocktail” was first described in Jerry Thomas’s 1887 edition of his Bartender’s Guide, How to Mix All Kinds of Plain and Fancy Drink. 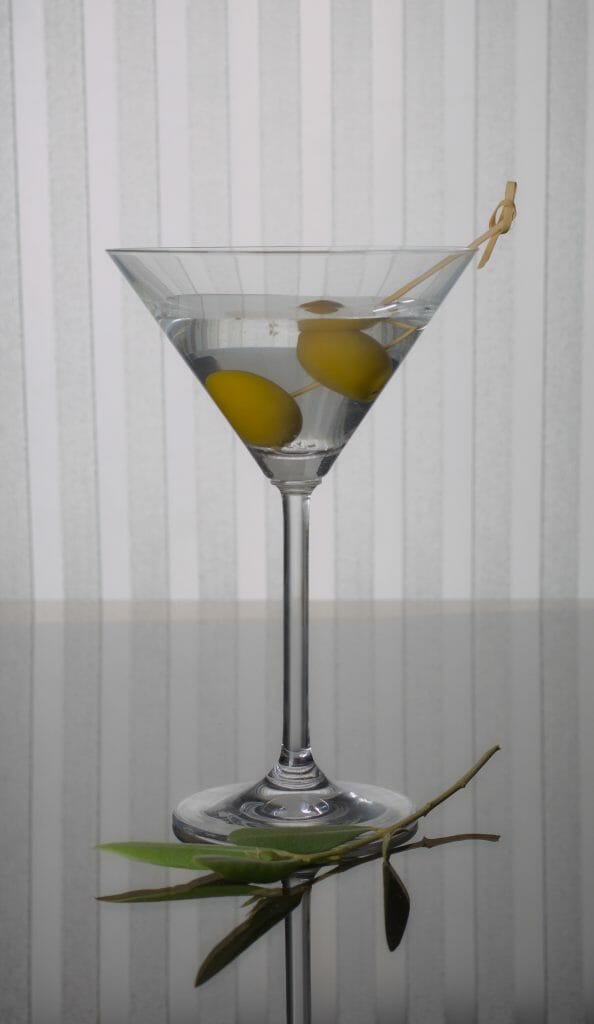 One version of the martini’s origin is that it has been comforting people since Martini di Arma di Taggia slid one across the bar top to a customer in New York in 1911.  Regardless of its origin, the martini is a classic cocktail like no other. 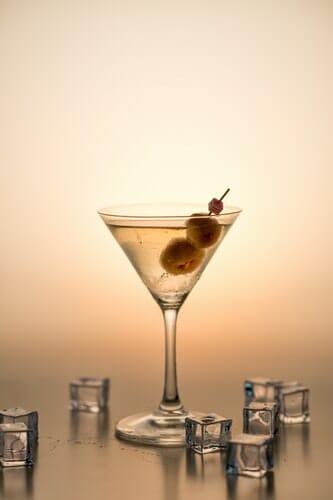 The Dirty Martini is believed to have originated in 1901, when New York bartender John O’Connor found inspiration in the classic’s famous olive garnish. First made by muddling the olive into the drink, and later by adding a splash of olive brine, the Dirty Martini took decades to reach a wide fan base. It eventually found favor among drinkers, including President Franklin D. Roosevelt, who served and drank them in the White House. Fast forward to modern day, and the cocktail is equally loved and reviled—ordered en masse by thirsty patrons. 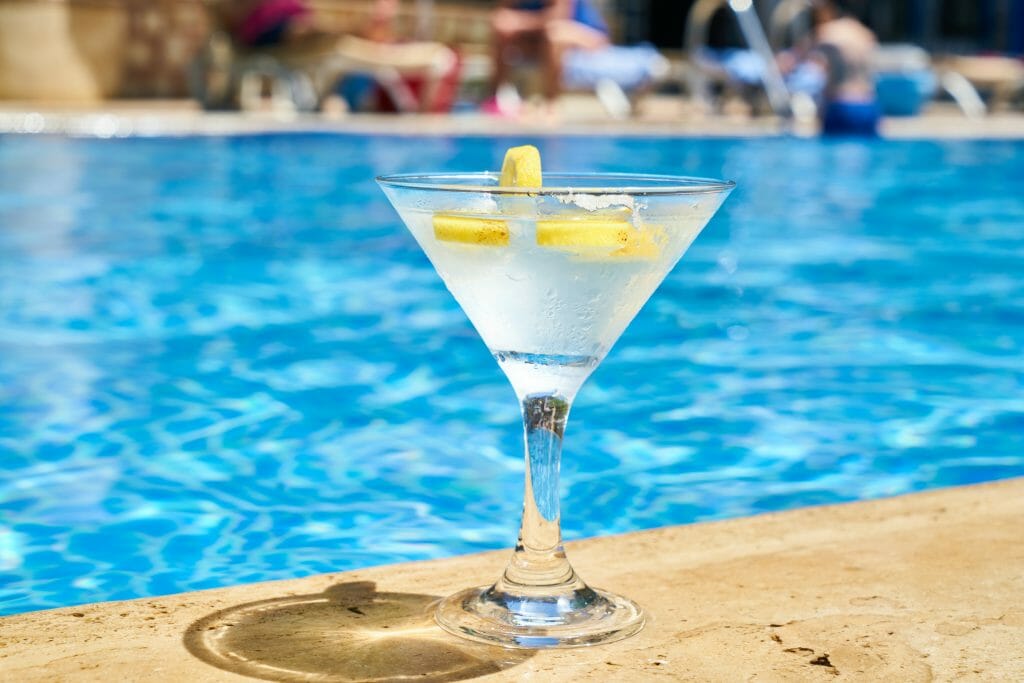 The Vesper or Vesper Martini is a cocktail that was originally made of gin, vodka, and Kina Lillet. The drink was invented and named by Ian Fleming in the 1953 James Bond novel Casino Royale.

The formulations of its ingredients have changed since its original publication in print, and so some modern bartenders have created new versions which attempt to more closely mimic the original taste.  Since Kina Lillet was discontinued in 1986 and the proof of Gordon’s Gin was cut in 1992, the original recipe can no longer be made exactly. Substitutes can be made that attempt to recapture the original flavor of the drink. 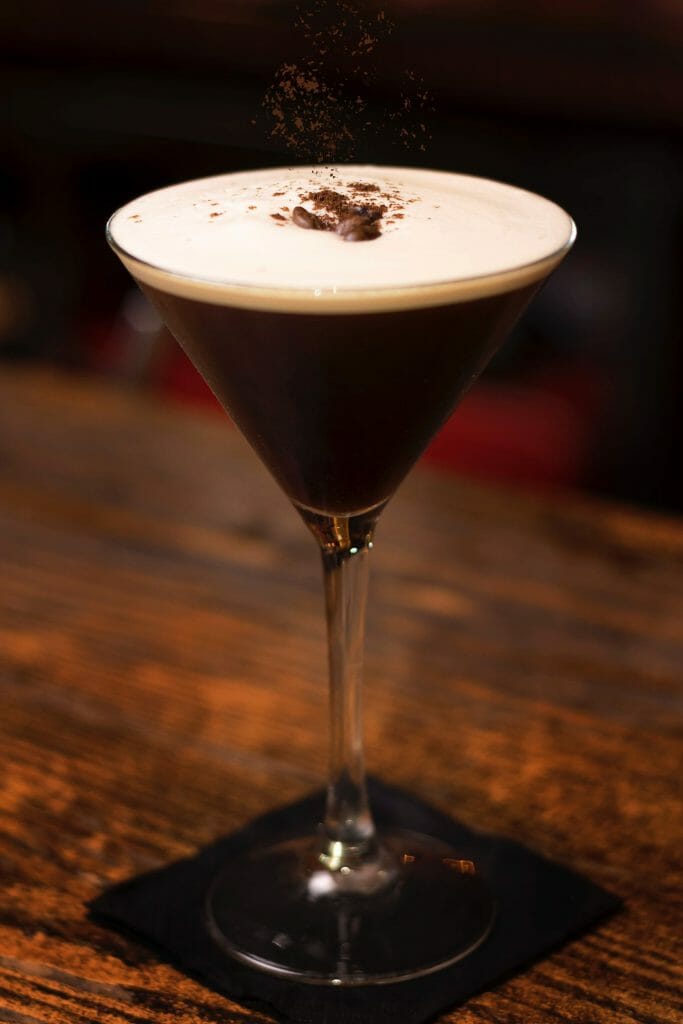 British bartending guru Dick Bradsell created this deliciously smooth cocktail. He is credited with revolutionizing the cocktail scene in London in the 1980s, through his work at bars such as The Player, 6 Degrees and Match.

The story goes that Bradsell created the drink at Fred’s Club in the late 1980s, when a young model, who Bradsell claims is now world famous, sidled up to the bar and asked for something to “wake me up”. His solution was a combination of vodka, fresh espresso, coffee liqueur and sugar, shaken into a frothy mixture. 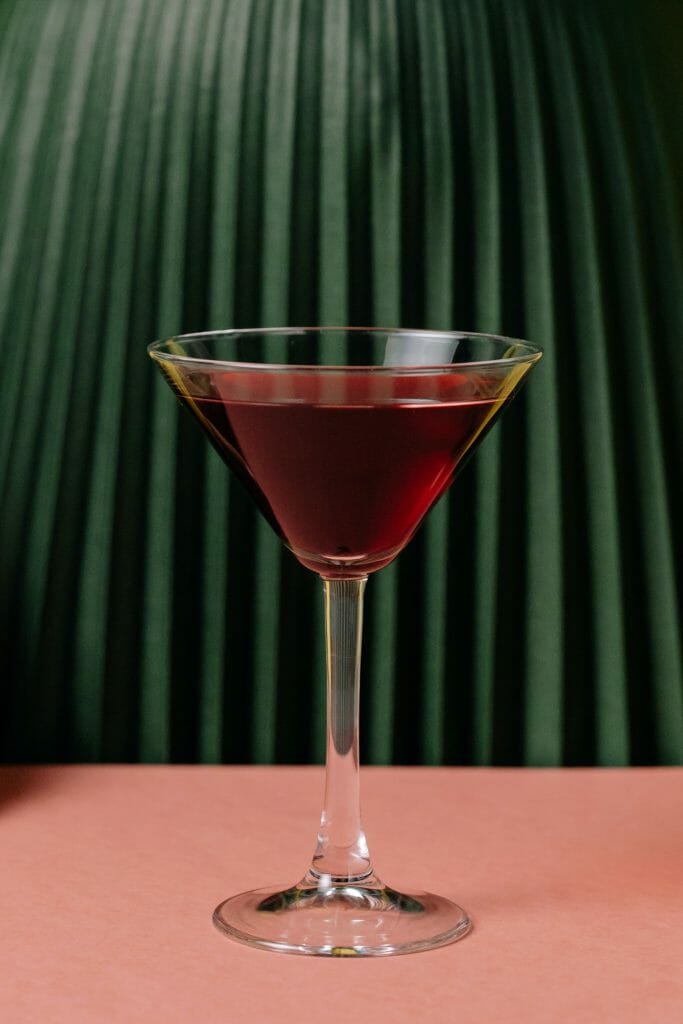 The French Martini helped to kick off the flavored Martini frenzy of the 1990s. Featuring vodka, pineapple juice and Chambord, the cocktail was first brought to prominence in New York City restaurateur Keith McNally’s Balthazar after the drink made its debut at another one of his establishments during the late-1980s.  The “French” moniker is due to the cocktail including Chambord black raspberry liqueur, which has been produced in France since the 17th century. The Chambord, along with the pineapple juice, adds rich fruit flavor to the drink. 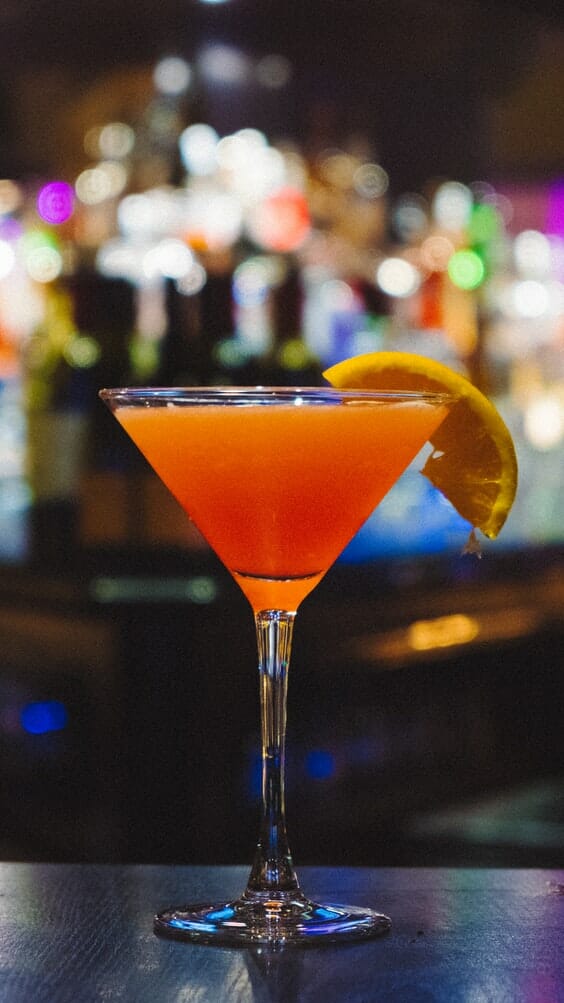 This orange martini recipe is delicately flavored with citrus and can work with either gin or vodka. It’s a perfect dinner drink that pairs well with salmon, salads, or any other light meal.  The recipe uses the classic martini base of gin or vodka with dry vermouth. The orange flavor is added with the sweetness of triple sec and zesty orange bitters. 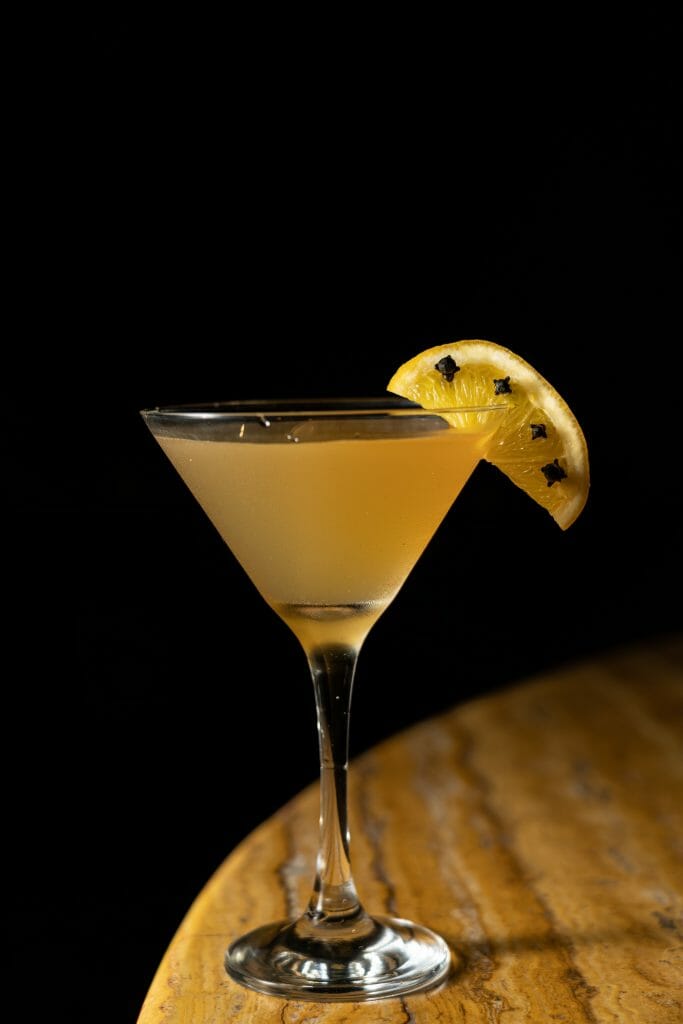 Lemon Drop Martinis, because of their simplicity to create, can easily be made at home.  It’s actually a fun throwback to one’s childhood where fresh lemonade was one of the things to which you looked forward sans alcohol, of course.  This grown up version of lemonade is just as delightful and a whole lot more fun! 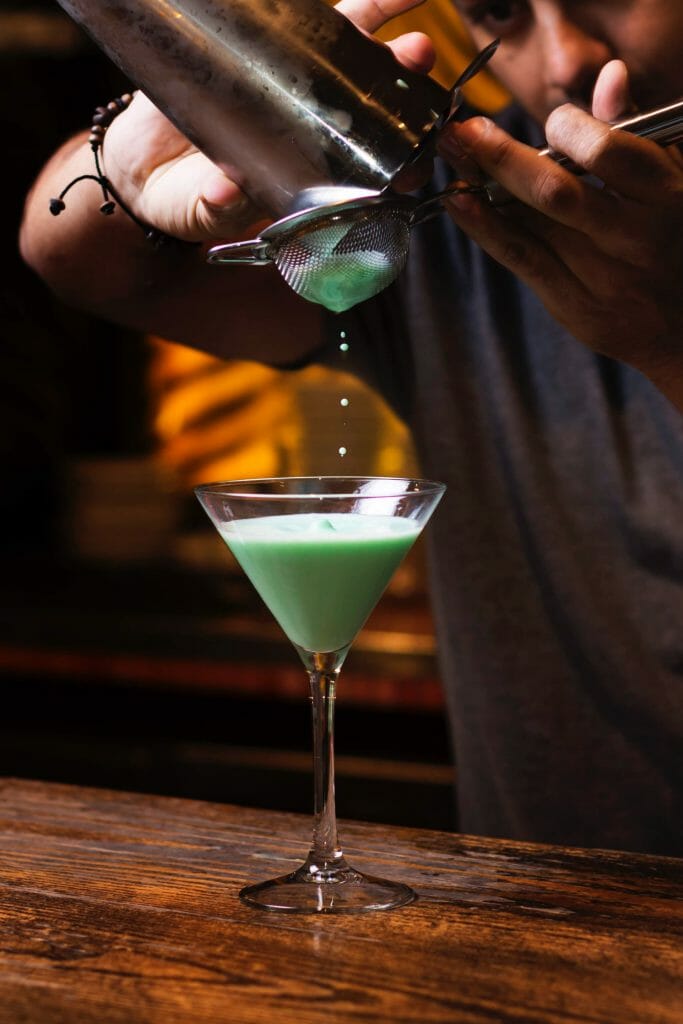 An Apple martini is a cocktail containing vodka and one or more of apple juice, apple cider, apple liqueur, or apple brandy. This drink, originally called an Adam’s Apple Martini because the bartender who created it was named Adam, was created in 1996 at Lola’s West Hollywood restaurant.  The Appletini featured above is frothier than the traditional one. 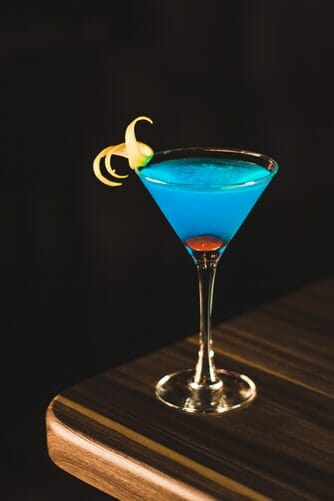 This magnificent blue martini is an excellent addition to any party and it’s very easy to create.  This vodka martini has an intriguing tropical fruit flavor and the color is captivating.  It’s certain to be a popular at any party, especially during summer.

Top 12 Caribbean Islands that are Perfect for Destination Weddings

How to Make Your Bachelorette Party Extra Memorable 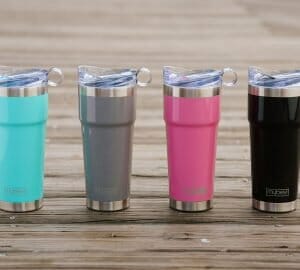 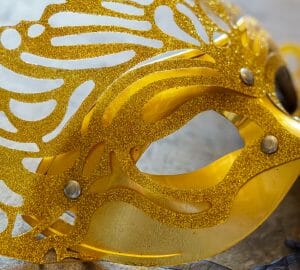 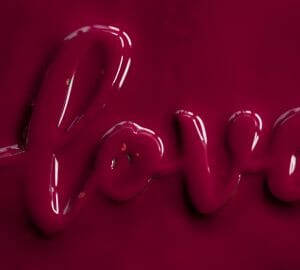