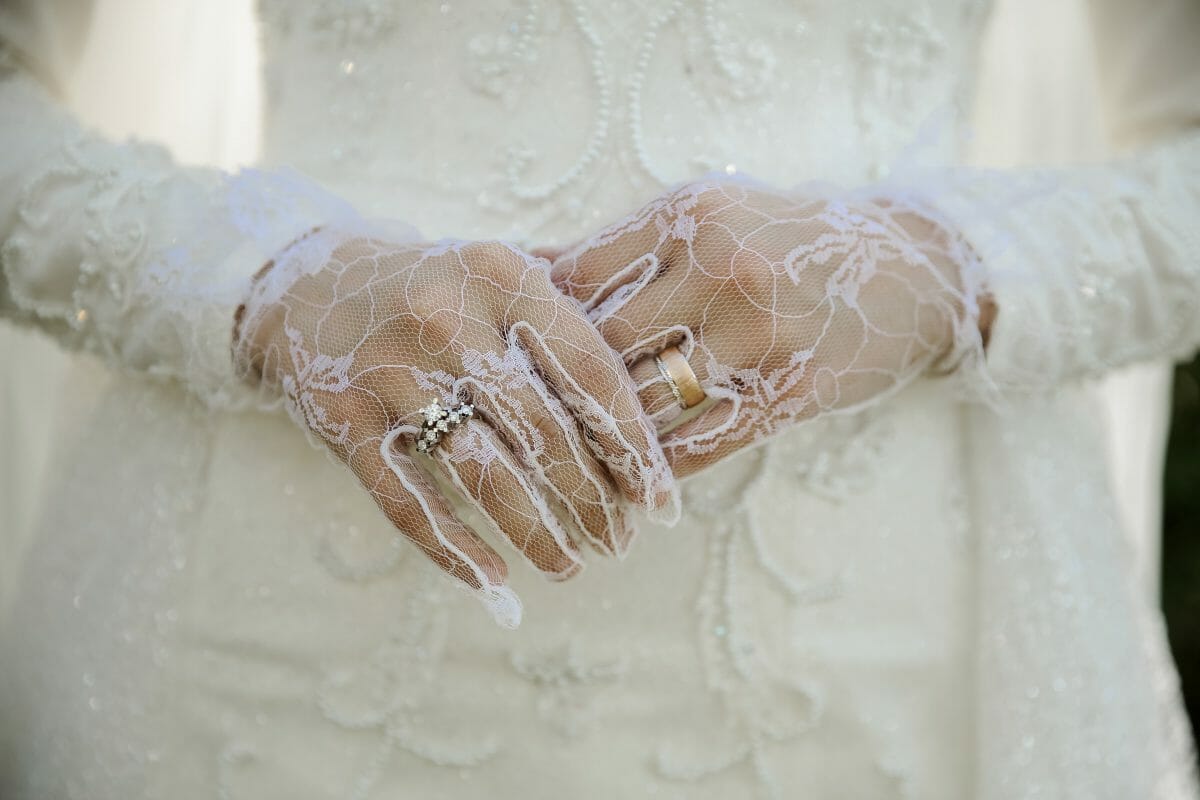 The wedding of Queen Victoria and Prince Albert of Saxe-Coburg and Gotha (later Prince Consort) took place at Chapel Royal, St. James’s Palace, in London, England.  The wedding of Victoria and Albert remains the most recent wedding of a reigning British monarch. All monarchs since Victoria were already married when they ascended the throne, with the exception of Edward VIII, who married Wallis Simpson after abdicating the throne.

In what was one of the most extensively documented weddings of the 19th century, Queen Victoria of England married Prince Albert while wearing a white satin and lace gown. While she was by no means the first bride ever to wear white for her big day, Queen Victoria’s wedding was one of the most anticipated affairs of its time and couples still follow many of the trends that she started today.

The Origin of the White Wedding Dress 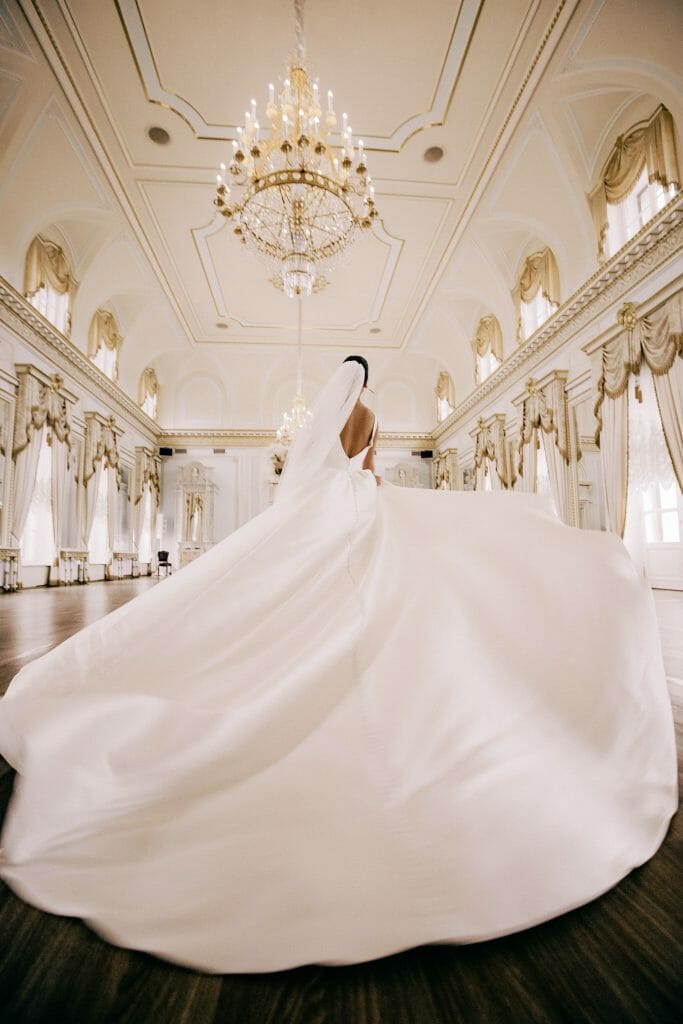 Prior to 1840, most brides were married in the finest dress that they owned. The color didn’t matter as much then, as that dress would go on to be used for many formal occasions and wasn’t exclusively a wedding dress. In Queen Victoria’s case, she declared that no guest attending her wedding should wear white, making it an exclusively a bridal look. Her wedding dress had a white silk bodice with a floral design, a flounce overlay of lace, elaborate lace sleeves, and a train that measured 18 feet (5.5 meters).

Orange flower blossoms, a symbol of fertility, also trimmed the dress and made up Queen Victoria’s wreath, which she wore instead of a tiara over her veil. The veil, which matched the flounce of the dress, was four yards in length and 0.75 yards wide. Her jewelry consisted of diamond earrings and necklace, and a sapphire brooch given to her by Albert. The slippers she wore matched the white color of the dress.

The design of the gown was so elaborate and highly coveted that the designer tore up the drawings once the dress was completed so it could never be replicated.

The Matching Bridesmaids and Their Gifts

Queen Victoria’s bridesmaids also wore white dresses, which were custom designs commissioned and designed by the bride. The Queen gifted each of her bridesmaids with a matching piece of jewelry, kicking off what remains a trend today.

In addition to wearing a veil for the ceremony, Queen Victoria wore a wreath of fresh white orange blossom flowers on top of her hair. Her bridesmaids (all 12 of them) carried the Queen’s large velvet-lined train down the aisle while wearing crowns of white roses in their hair. 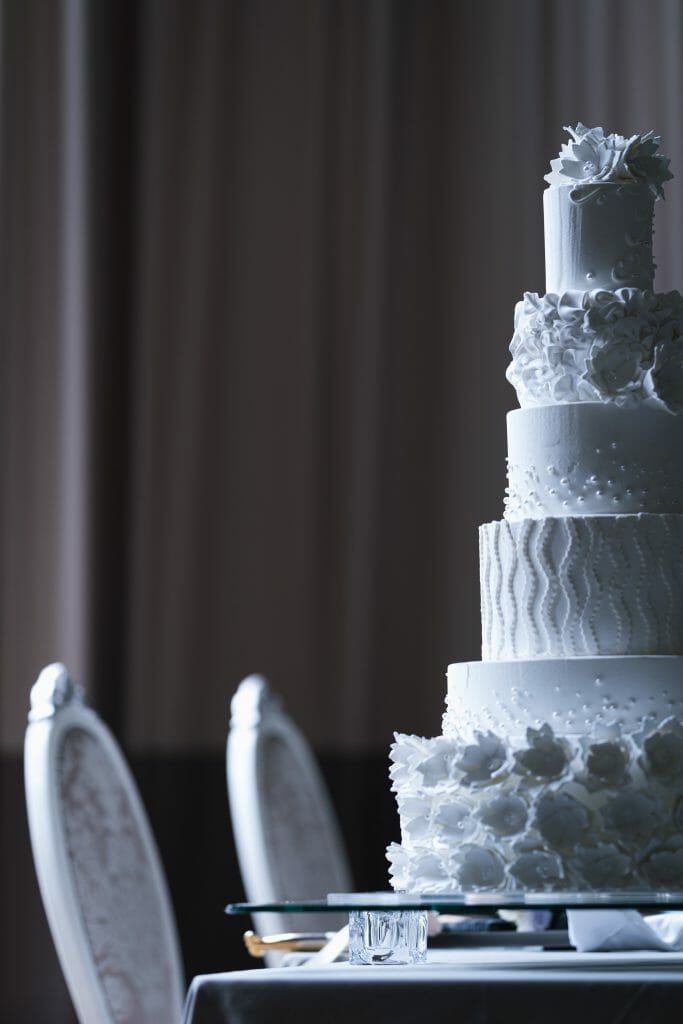 It was Queen Victoria’s wedding cake that started the modern tradition of tiered white cakes. Hers featured fruitcake covered in almond paste and a thick layer of what we now call royal icing. The cake was ten-feet in diameter and weighed nearly 300 pounds! 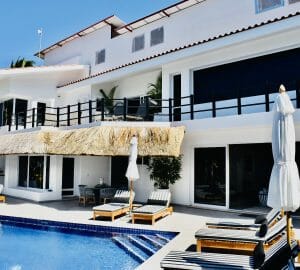 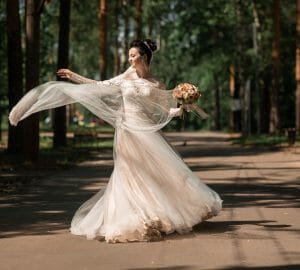 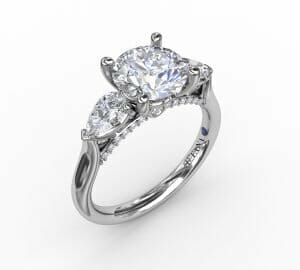